Road markings are features of only relatively advanced countries, usually called "first world". Other countries have usually either no or minimal road markings.

Essentially, the purpose of all road markings is communication. Because roads are usually public passages road markings therefore convey information on behalf of the designated authorities. On private roads, presumably, the information is private, e.g. "directors' car parking only" on a roadway of a large corporation.

Appropriately, road markings began in the most advanced of all countries the United States of America. This was in the early 20th century. In the United Kingdom it was during the second world war that the Pedestrians' Association insisted on road markings to reinforce safety during blackouts and at other times. The usefulness of road markings drove their rapid proliferation and today all over the country they are ubiquitous.

In the UK driving instructors are given to tell foreign drivers seeking knowledge of the local roadways and motorways that in that country road markings are particularly extensive and prolific.

There are so many kinds of road markings that it is daunting to describe. Condensing down we have, possibly amongst others: 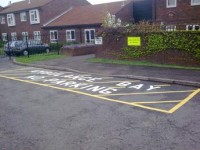 We apologise for any and all omissions in this fast-evolving technology. Some readers will be interested to know that the man who invented cat's eyes made a fortune out of his patent.

We are focusing on non-mechanical markers at this time.

Paint has the supreme virtue of low cost. This makes it attractive to cash-strapped nations wanting to reduce the terrible motor crashes that characterise developing world roadways. Mechanised road marking by specialised vehicles can only be described as impressive. It is impressive to watch. Huge trucks called "stripers" each containing hundreds of gallons of paint drive slowly along designated routes with programmed equipment coating the roadway in certain particular patterns. The road has to be spotlessly clean during this procedure.

Thermoplastic road marking is one of the hallmarks of truly advanced countries such as the United Kingdom. The barrier is cost; It is expensive. Transport economists have given thermoplastics the tick of approval by assessing their cost to performance ratio. Essentially, thermoplastics last longer than paint and Pound for Pound are better value than paint. The initial cost is higher. As in the case of mechanised painting of roadways, the sight of specialised trucks doing the job is impressive. The plastic is superheated to 200 Celsius and gradually poured into a feeder and thence to a pattern maker that applies the hot plastic to the road surface. A visible vapour rises and envelopes the machinery as the truck slowly wends its way along the road. Hot plastic tape is used for small-scale applications and the application is one of:

As stated above this is a rapidly changing technology and we have only scratched the surface.